What You Need To Know About 3D Printing Carbon Fiber

Carbon fiber is a lengthy chain of carbon atoms linked together that was originally produced by Joseph Swan in 1860. The chain has a diameter of 5 to 10 micrometers and a length that varies depending on the use. Carbon fiber has gained popularity in a variety of industries over the years due to its unique qualities that include high stiffness, high tensile strength, low weight, high chemical resistance, high-temperature tolerance, and low thermal expansion. Carbon fiber is five times stronger and twice as stiff as steel, while also being five times lighter. Carbon fibers, as you might expect, are well-suited to applications that rely on a material’s qualities to improve performance.

Carbon fibers are rarely employed on their own, as some of you may already know. They’re commonly mixed with other materials to make a composite material, which in this case is referred to as carbon-fiber-reinforced materials. These composites are made up of a matrix material, usually a polymer which carbon fibers are added; however, non-polymer materials like ceramics can also be used. The key advantage is that you get a stronger—yet lighter—plastic with greater rigidity.

Carbon fiber composites have traditionally been employed for structural design, where greater weight translates to higher lifecycle costs or poor performance. Carbon fiber composites can be used to make a variety of items, including bicycle frames, airplane wings, propeller blades, and automobile components. Given the various advantages of carbon fiber, it’s no surprise that it’s being used in more than just traditional production techniques. Carbon fiber reinforced materials or methods developed to operate with this composite have been offered by a rising number of 3D printing businesses in recent years to enable higher performance applications. Here is what you need to know about 3D printing carbon fiber.

Short carbon fiber segments of less than one millimeter in length are mixed with a thermoplastic known as the base material to create carbon fiber filament. PLA, PETG, Nylon, ABS, and Polycarbonate are just a few of the popular filaments available with carbon fiber fill. Because these fibers are so strong, they boost the filament’s strength and stiffness while simultaneously reducing its overall weight. Carbon fiber filament 3D printing requirements should be similar to those of the base material to which the carbon fibers were added. The primary difference is that fibers can clog and wear 3D printer nozzles made of softer materials like brass, and experts therefore advocate using a hardened steel nozzle instead.

Carbon fiber filaments have been created by some businesses for more sophisticated purposes. High-performance polymers (HPPs) such as PEEK or PEKK are used as the basis material for these filaments. As a result, they provide not only the durability and excellent mechanical and chemical performance of HPPs, but also a higher strength-to-weight ratio. Because HPPs rely on extruders that may achieve temperatures of around 400°C and systems with heated chambers and build plates, the printing settings must be changed.

Carbon fiber filament is significantly more durable than unreinforced filament. Continuous carbon fiber reinforcing is another approach that can be employed to make a part that is even stronger. Carbon fiber retains a significantly higher amount of its strength since it is not split up into smaller bits. Continuous carbon fiber 3D printing, in fact, is strong enough to replace aluminum while weighing half as much. Manufacturers of 3D printers believe that it can replace metal 3D printing in various applications, with the key benefit being that it is less expensive. Finally, by using Design for Additive Manufacturing processes to place the carbon fiber, it is feasible to increase the strength of a product while minimizing the amount of material used.

There are only a few companies on the market that can print carbon fibers in a continuous fashion. Depending on when the carbon fiber is inserted, there are two types of actors (it can be added before the 3D printing process or during). Continuous fiber 3D printing is known as prepreg-based when added before extrusion, and co-extrusion when added during extrusion. In the prepeg procedure, you have a composite filament (or tape), but instead of being cut up, the carbon fibers are impregnated with the polymer by a pultrusion process.

Markforged, Anisoprint, CEAD, and others are among the companies that offer continuous fiber 3D printing on the market. Desktop Metal has lately joined the race with the debut of Fiber, a novel technology. Micro Automated Fiber Placement (AFP) is used by Fiber. 9T Labs has also developed Additive Fusion Technology (AFT), which allows for the mass production of carbon composites at a reduced cost.

Moving away from the more well-known extrusion method, AREVO’s unique Directed Energy Deposition technology, in which a laser heats the filament and carbon fiber at the same time as a roller compresses the two together, is an intriguing concept. Impossible Objects and EnvisionTEC have both incorporated carbon fiber 3D printing systems into their product lines, but the technique used is slightly different. Using a lamination method, they weave carbon fiber sheets into a print. Finally, Continuous Composites employs a hybrid process in which a strand of fiber is soaked in resin and subsequently cemented with UV light, similar to SLA 3D printing.

We hope you have enjoyed our recap of what you need to know about 3D printing carbon fiber. While 3D printing with exotic material such as carbon fiber is not for everyone, easier filaments such as PLA, PETG, and ABS are perfect starters for those new to the world of 3D printing. That being said, if you are experienced and are looking for unparalleled strength in your 3D prints, be sure to reach out to us to purchase nylon carbon fiber filament. 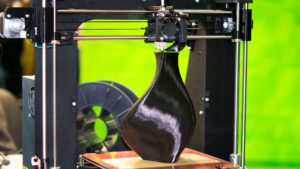 Reasons Why PETG Is One of the Strongest Filaments

PETG is a strong filament you should use in your next 3D print project. Here are the reasons why PETG is one of the strongest fibers you could use. 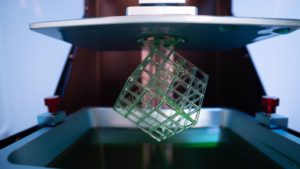 What Is Warping in 3D Printing? And How Do You Fix It?

Warping is one of the biggest problems you may face while 3D printing. Here are some top tips to help you fix and avoid any warping that may happen! 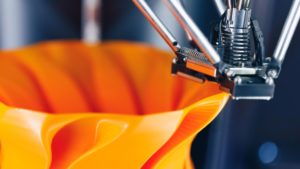 The best way to form durable 3D objects is to adjust your 3D printer settings and buy the right filament type. You 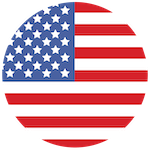